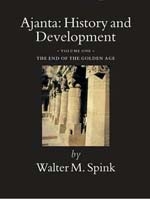 Volume One:  THE END OF THE GOLDEN AGE

Volume I deals with the historical context in which a dramatic burst of activity took place at Ajanta during the reign of the Vakataka emperor Harisena (c. 460-c.477), and with the sudden halt of activity almost immediately following the death of the emperor. As a veritable illustrated encyclopedia of Harisena’s times, Ajanta is crowded with information about both its development and its demise. 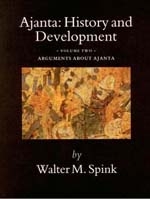 Volume II begins with the contentious yet challenging views criticizing Spink’s so-called “Short Chronology” for Ajanta’s later phase.  After attempting to counter these argument in general terms, the author presents a detailed analysis of the form and development of Cave 26, as a model upon which his other arguments are built. The second part deals with the dramatic impact of the emperor Harisena’s death 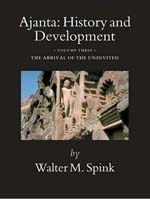 Volume Three:  THE ARRIVAL OF THE UNINVITED

Ajanta is filled with hundreds of Buddha images and stupas, both carved and painted, that were added to the caves at the site during the brief  and troubled two or three years before the site’s patronage finally and suddenly ended, due to the deteriorating political situation, in about 480 C.E  These “intrusive” images donated, in order to make merit, by the local people and still-resident monks after the major courtly patrons 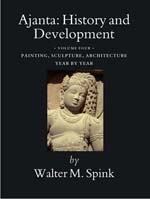 Year by Year is planned as a biography of this remarkable site, starting with the earliest caves, dating from some two thousand years, to its startling renaissance in the brief period between approximately 462 and 480.  Concentrating on the excavations of the later period, during the reign of the Vakataka emperor Harisena, it attempts to show how, after a surprising gap of some three hundred years, 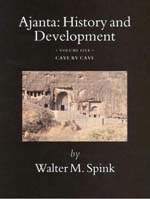 Volume V of the Ajanta series systematically and exhaustively describes each cave, starting with the imperial Cave 1.  This detailed analysis of each cave’s features, combined with the comprehensive series of plans, charts, and graphs, will assist the reader, as well as visitors to the site, to piece together the huge jig-saw of Ajanta’s history and development, and to come to understand why Ajanta,