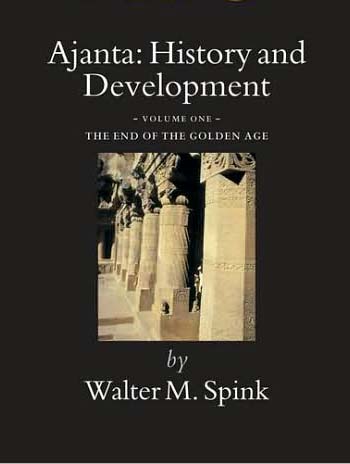 Volume One:   THE END OF THE GOLDEN AGE

Volume I deals with the historical context in which a dramatic burst of activity took place at Ajanta during the reign of the Vakataka emperor Harisena (c. 460-c.477), and with the sudden halt of activity almost immediately following the death of the emperor. As a veritable illustrated encyclopedia of Harisena’s times, Ajanta is crowded with information about both its development and its demise. Considerable value is also placed on the reconstruction of historical information about Ajanta and its times that can be found in the Dasakumaracarita (The Tale of the Ten Princes) by the author Dandin.

Spink argues that the Golden Age of India did not fade away with the decline of the Gupta dynasty in the late fifth and sixth centuries, but it found its apogee under the Vakataka emperor Harisena, who came to power in central India in 460, and ended abruptly after his death in 477. His story pivots on the devotional complex in 29 Buddhist caves created by the Vakatakas near the ancient town of Anjanta. This first volume traces the end of the dynasty and the collapse of the complex.