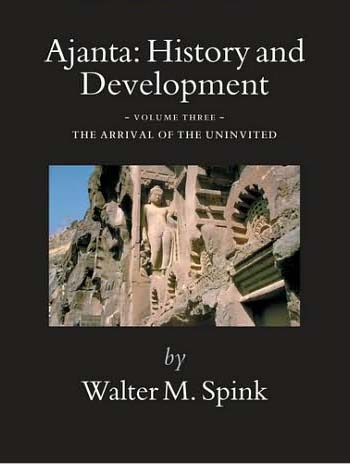 Volume Three:  THE ARRIVAL OF THE UNINVITED

Ajanta is filled with hundreds of Buddha images and stupas, both carved and painted, that were added to the caves at the site during the brief  and troubled two or three years before the site’s patronage finally and suddenly ended, due to the deteriorating political situation, in about 480 C.E  These “intrusive” images donated, in order to make merit, by the local people and still-resident monks after the major courtly patrons had suddenly left the site in about 478, form a helter-skelter array, that expediently violate the formerly well-laid decorative programs of the caves.  However, they appear only in caves that are “alive”—caves in which the shrine Buddha had been finished—often in great haste—and dedicated.  Remarkably, after this final spurt of anxious pious activity, not a single image was ever carved or painted at Ajanta again.

The Vakataka patrons fled the devotional complex near Ajanta, India, soon after the dynasty's last emperor Harisena died in 477, and the site was taken over by the Asmakas. After the Asmakas wandered off to make war, patronage ended, and monks and devotees still living in the region began making their offerings. Spink (history, U. of Michigan- Ann Arbor) examines the paintings and sculptures that appeared on and in caves that had already been dedicated by the earlier patrons but, oddly, not in otherwise suitable places where there were no previous images of Buddha. The maps, photographs, index, glossary, and bibliography are deferred to the final volume in the series.