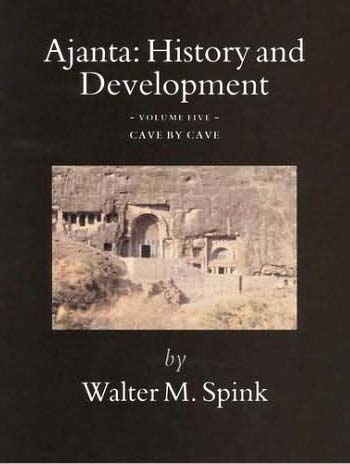 Volume V of the Ajanta series systematically and exhaustively describes each cave, starting with the imperial Cave 1.  This detailed analysis of each cave’s features, combined with the comprehensive series of plans, charts, and graphs, will assist the reader, as well as visitors to the site, to piece together the huge jig-saw of Ajanta’s history and development, and to come to understand why Ajanta, during its richly crowded Vakataka phase (c 462-c.480) is probably the only monument in the world that can be analyzed, motif by motif, on a year to year basis; in fact, developments at the site take place so clearly and so rapidly, that its growth can be meaningfully spoken of only in such specific terms, once its outer limits have been established on the basis of relevant inscriptions.

Volume five or Walter Spink's monumental Ajanta series systematically and exhaustively describes each cave, starting with the imperial cave I. With the Help of the Earlier Published volumes, this detailed analysis of each cave's features will assist the reader and visitor in piecing together the huge jig-saw of Ajanta's history and development and will enable him to read the stones for himself. Many of the most telling and significant illustrations of the story of Ajanta can be found in illustrations volume four. The cave-to-cave treatment is preceded by a concise mini guide to the complex, putting in a nutshell the main arguments and conclusions. some