The Cow Herder Goes to Washington

CHARLES LANG FREER could scarcely foresee that his generous bequest to the nation also included sponsoring graduate students in the Asian art program at the University of Michigan to participate in the great anti-war moratoriums in Washington, DC, in the early 1970's. This is how it happened: 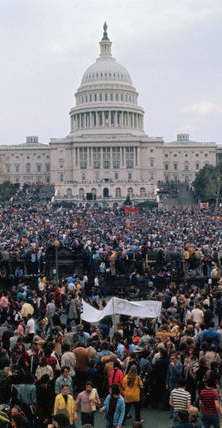 AN annual subsidized study-tour to the Freer Gallery of Art from Ann Arbor was built into our M. A. program, but it was Walter who scheduled our trip to coincide with the demonstrations against the Viet Nam War. How our faculty-chaperone was selected from the other professors was a mystery, but the lot always fell to Walter, known on these trips as in loco parentis Vakatakas. (Other faculty surely realized that to be responsible for six or seven early-twenty-somethings was tantamount to a migraine.) And Walter himself would probably admit that these pilgrimages to Washington were valuable training for overseeing large student groups going to Ajanta, which happened much later.

At the Freer Gallery Walter forced the Indian specialists into the China and Japan rooms, and the East Asian graduate students were pushed to the Indian gallery to admire the exquisite Chola Parvati and the spectacular Gandharan reliefs. His outspoken eclecticism was hardly endearing at the time, but we realized later that Walter's draw to all art has enriched us all.

The march followed on the next day, on a bitterly cold Saturday morning. We mingled with the hundreds of thousands of protesters from around the country, Walter herding us together effortlessly, ensuring that his charges from Michigan stayed close together. I recall someone wondering out loud if Walter was not a cow-herder from Gokula in his last life. The march suddenly lurched forward, and at this point our leader from the Deccan unfurled an enormous banner proclaiming: "Asian Art Historians from Michigan against the War." As super cool individualists, we were naturally horrified at this corny group activity that drew such loud attention to ourselves in spite of our desire to protest the war. But Walter reined us in behind the banner, insisting that each of us take a turn supporting the two poles. Bunched together marching behind our standard, Walter in the center, we might have been taken for our capital's first rasa lila. When we returned to Ann Arbor, the bombs of course were still falling over Southeast Asia, but our participation in the demonstration reinforced the connection between our scholarly lives and the everyday lives of Asians today. Decades have passed, and the construction dates of the Ajanta caves have faded for me, but our pilgrimage to Washington remains a significant part of my education.

Frederick Asher is a specialist in South Asian art. His current research considers the architecture of contested religious space and the issue of copying/originality in Indian art.

Janice Leoshko :: The Importance of Questions

Prior to joining the faculty in 1993 at The University, Associate Professor Leoshko worked at the Los Angeles County Museum of Art for seven years as the Associate Curator of Indian and Southeast Asian Art

Susan L. Huntington, Ph.D., is Distinguished University Professor and Professor of History of Art, Emerita, but continues to teach and advise graduate students at The Ohio State University.